Today we were travelling 6 hours by public bus to our destination, Kampong Cham which lay south east of us along dusty, broken edged roads. I'm sure there are rules of the road here but from a outsiders point of view it seems to be a game of real life top trumps, the bigger the vehicle and louder the horn being the 2 most used categories, closely followed by level of drivers derring do. It helped that our driver had won the prestigious Cambodian Horn Blower of the Year award 2006, successfully retaining it every year since through sheer dedication and frequent blowing. He liked the horn. He also liked his mobile phone and selecting which music dvd we were going to watch. Reminiscent of sixties, seventies and early eighties "top of the pops" shows, but with an south eastern Asia flavour, it was a good watch if only because it took your focus away from the road gently weaving from left to right and the ongoing game of chicken that we had inadvertently become involved in.

So we remained folded our seats for around 6 hours with the weak aircon dribbling coolish air above us, bar a couple quick stops to use less brown star toilet facilities, gawp at almost inedible foods (by entitled westerner standards) and top up on pre-sealed packets of crisps and bottled water. You learn to keep your antiviral hand wash in close proximity when you visit the "traps" in those places, but sometimes the call of nature just has to be answered, no matter how much you want to pretend that you're not in.

Our hotel was situated right across the road from the Mekong River and after a quick bit of lunch some of us headed out to cycle around one of the near by islands, making the crossing by traditional wooden ferry boat with engine to avoid getting our bikes and feet wet. Rural and beautiful, this is the second time on this trip I have almost run out of hello's with children and families coming out to stand roadside to greet the crazy tourists on basket fronted lady bikes either verbally or with high five hand slaps as we cycled by. A smile sneakily slipped onto my face, I wiped it clean as soon as I noticed before I scared someone. No one should have to see that. 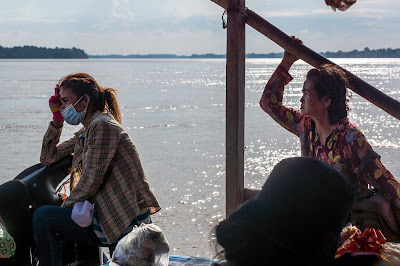 We made a couple of stops on our trip, one to a school where we were invited to sit and talk with the children and teacher to help them learn English through interaction. The children ranged from ages 10 to 13, their teacher just a child herself, was not much older but had a better basic understanding of the language so was passing on her knowledge. This is how they learn here.

Secondly we stopped and tried a grapefruit like fruit which tasted somewhere between what you would expect it to and orange, almost like breakfast juice in handy pre packaged natural form, Cambodia is a country that continues to delight and surprise with its experiences and warm, friendly and open people. It's not perfect, but you get the impression it wants to be. It's just early days.

As we caught the ferry back, the most beautiful sunset dropped across the river and I felt blessed and honoured to be in that place, at that time, with great people. it just a shame I had to bruise and batter my right butt cheek on that ruddy bus to get there. 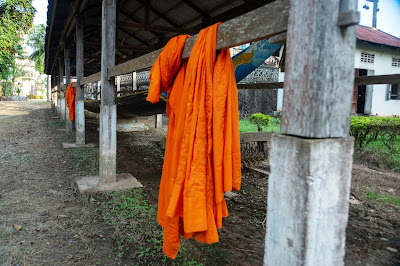