Today I saw a man stroking his pussy in public. After all the warnings of how crazy and perverse Bangkok was,  I wasn't ready for that.

I awoke late, there are no windows in the new dorm so the realisation it was past 11am was somewhat of a shock, but I presume I needed the sleep.

Showered and prepped with a spot of blood on my chin from a nick whilst shaving,  I wandered down stairs and ordered the full continental breakfast which consisted of croissant, 2 slices of toast and jam, coffee, juice and a banana. The price was stupidly cheap as usual but that bears no relation to quality here, it was a good size, tasty and nutritional start to the day.

After that began today's stroll. I left right then righted left, wandering along the main road for 20 minutes or so past shopping stalls, malls and a guy drumming the sound of the city on everyday rubbish until I reached Lumphini Park, Bangkok's version of New York's Central Park where cyclists cycle, runners run, marshal arts are practiced along with dance moves and performances, and as previously alluded to, a man sat stroking his pussy.

To be fair it might not have been his. There are lots of cats here, just lazing the days away, along with a few stray dogs, fish and monitor lizards.

The first one shocked me and each one I saw after as I walked around the park was progressively larger than the last. Apparently they have been known to attack people, No mention of those in my rough guide.

I remember seeing a documentary once where Steve Irwin was chased through the wilderness before finally scrambling up a tree to escape a Komodo Dragon who had tasted the blood in the air of a small cut that Steve had managed to pick up on his leg whist stalking it through the bracken.

I thought about the nick on my chin. Could that thing taste it? He was kind of looking at me funny.

Perhaps he had read my blog. 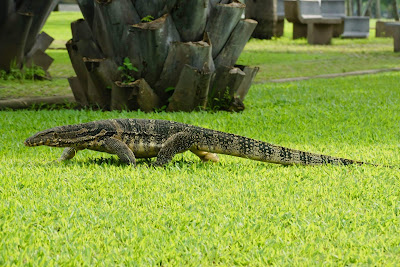 After I arrived back at the hostel I decided to blow a chunk of  my budget on booking a couple of tours that would see me through to the 13th, which is when I depart Bangkok on a tour which should sees me through Cambodia and into Vietnam by the 23rd.

The first one, tomorrow takes me through the backwaters of Bangkok and ends close to the grand palace. I will need to take my jeans as apparently ankles must be covered.

Then on Monday I am taking a 3 day tour to Kanchanaburi and it's surrounding areas to hopefully see amazing waterfalls, exotic wildlife and the harrowing site of the bridge over the River Kwai. It  should be a tour to push emotions in opposing directions. I think it will change me.

After that I'll be back in Bangkok for four days until the 13th.
I'm sure Bangkok has enough to keep me occupied for those days.
It is, as I'm slowly discovering, quite a exciting and diverse place to be, albeit a little bloody hot.

Additional Entry.
I wandered up the street this evening away from the hustle and bustle of Pat Pong which lays a few blocks down from where I'm residing this evening. In one of the classier bars there was a lady performing a beautiful rendition of Lenka's "The Show" complete with missing letters, which just added to its charm.

Just seems quite apt at this moment in time, I urge anyone who is wondering about where I am at the moment to give it a listen.

Plus it's a great lil' tune. 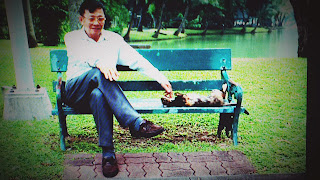