Check out time at the hotel was a rather relaxed 12:00 pm, but I was packed and ready to go well before that deadline came to pass, all my sorting had been done well in advance. My green rucksack that had served me faithfully as a day pack since Vietnam had now become my designated carry-on holdall due to its ability to comfortably accommodate everything that I wanted to have (rather than just needed to have) with me. The items it held for the return leg still primarily consisted of the usual items that I couldn’t afford to lose, such as injections, partly broken camera, dented lenses, resilient laptop, battery charger and blood testing gear. Also shoe horned into the now rather tardy looking bag were some basic toiletries to enable me to freshen up en-route and a warmer, clean set of clothes which were packed in preperation for the change of climate I was expecting to encounter when I arrived back in the U.K. It’s not that the temperature in May is devilishly cold, but rather that there was undoubtably going to be a sharp step down in temperature from the near 40 degrees C that had been baking Bangkok. 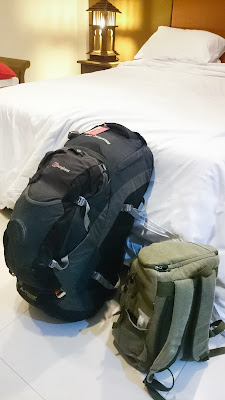 At about 10 a.m I made my way down to the large, highly polished tiled floor reception of the Lullaby Inn, handing in  my room key and checking if it was possible to leave my larger bags somewhere for a couple of hours whilst I went to get something to eat and lose some more items. Courteously I was shown to the back, dimly lit corner of the room and invited to place my bags behind a large, solid wooden counter, completely out of sight from any passing eyes and in direct line of sight of the manned reception desk. It was good enough for me and with locks secured and bags hidden I exited the main doors and made my way out once more into the oppressive heat outside.

At the National Stadium station I left the BTS and made the short walk over the connecting concrete walkway towards the MBK shopping centre, arriving there just after midday with the thought of food still bouncing around in my mind. As I shuffled forward in the queue for the mandatory security checks my fleeting thought of perhaps grabbing a final Pad Thai from the 5th floor canteen was almost immediately discarded. My rationale being that 30000 feet up in the air in a confined space passing over the middle east was probably not going to be the best place to be if I were to suffer from any sort of adverse reaction akin to the one that had jolted me a few days before. Still, one of the many great things about the MBK is that there is no shortage of choice of anything, and this happily extends to finding places to eat and grab a bite to drink. At the gate I took my hat off and placed it into my large right hand side pocket of my now tired shorts, opened up my bag ready for it to be inspected and passed through the checks without further hinderance or delay.

Once inside I meandered through the Tokyu department store then into the main complex itself, walking along the spaciously wide open corridors and taking the central escalator to the 3rd floor whilst my now one track mind continued to be almost solely occupied by food, wrestling with the thoughts of noodle vs bao and also how to balance out the timings of the next couple of meals around both diabetes and the upcoming shift in time zones. Before I had a chance to solidify my thoughts though, I started to tune in that something felt amiss, and as I dropped my hand down to my right hand side it dawned on me that my lightweight cap that had been purchased in Hanoi just a few days was missing from its well worn pocket.

It's difficult to explain sometimes, but it comes down to a question of head. Some, in fact most caps don't suit me at all. I am not blessed with a fashionably shaped dome and frankly most of the caps that I try just make me look like a horse that has been cast out from a local derby and has then rushed to put on a few items of clothing to hide himself from the world (going indonkgnito?). To find one that doesn't do this to me is a rarity. To lose one comes close to being an unmitigated disaster. To lose a couple in just under a week, well, that's just completely two-hat(ish).

I retraced my steps a couple of times, asking security whether I had dropped it on the way through the entrance, looking under the clothes and items that lined the avenues in the department store and scanning wherever I had walked, but all to no avail. On the ground floor I asked at the main information desk and a call was put out over the tannoy, in Thai, so I had no idea what was really being requested throughout the shopping centre. I know the 555 is used by Thai's as a way of writing / communicating laughter, but when it comes to interpreting dialogue (apart from a few simple sentences and words), I really don't have any command of it at all. For all I know they might have been tipping off security about the undisguised mule-man who was standing around looking hopelessly lost. What do you call a deer with no eyes and no legs? 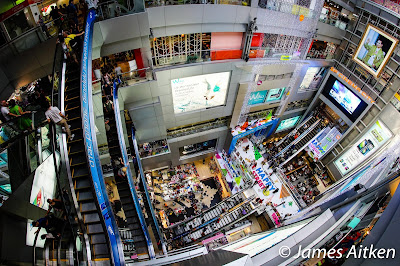 The last people I checked with were the ladies at the Tokyu department store's customer service desk, a last ditch attempt where I encountered a little more difficulty describing what it was I was trying to find. The ladies looked at each other seemingly over perplexed by my inadequate communicative efforts as I tried unsuccessfully to explain that I was looking for my lost hat, initially using simple english sentences such as "I've lost my hat" or "cap" or variants of before then moving on to the clumsily miming of doffing of the now missing imaginary hat. Things could have been so much easier if I had been able to speak just a little bit more Thai.

After incorrectly being pointed toward the hat section of the store where I could buy a new one if I wanted,  I fired off a last ditch English language salvo, carefully trying to avoid the english stereotypical trait of just repeating the same word louder and louder and louder until someone "gets it". I emphasised the word "lost," as this seemed to be the word that was causing the biggest problem, trying to think of an alternative and simple way to describe the same thing.

So I repeated the word "Lost" as clear as I could, apparently getting no further along, until the magic finally happened.

As if transported back in time to a post analysed awkward 70's style sitcom scenario, my communicative efforts broke through their confining language barrier and a look of relief washed over the faces of the contestants of the opposite side as they finally deciphered what I had been trying to communicate, no doubt seeing the light at the end of the tunnel. "AHHH ROST" one of the ladies exclaimed as excitedly as Una Stubbs ever did when guessing a word on "Give us a Clue" and I kind of got caught up in the moment too. "Yes, ROST" I said back just as excitedly, not thinking how bad that must have actually of sounded until after the event. I take comfort though in knowing that however awful it might have been, it still falls way short of the infamous Steve McLaren interview that he gave whilst he was the coach of footballing side F.C. Twente, where he answered questions with a twang so dutch that you half expected him to conclude the interview by offering the interviewer a "Smoke and a pancake?".

The ladies took my local mobile number incase anything got handed in, but as I was now running out of time I explained that I was leaving for the UK shortly so not to worry too much, that I would just check back before I left. I then went back upstairs and grabbed my final Chicken Avosabi sandwich and lemon iced tea from the "Au Bon Pain" and sat there watching the clock tick by before then embarking on a quick tour around the market styled stalls to pick up the last of the lightweight souvenirs that I would be able to cram into my bag when back at the hotel.

On the ground floor I passed an Adidas shop, and in my acceptance that my week old hat was gone, I walked in to see whether I could find an alternative. There at the back of the store was the exact same hat and as the price was right I grabbed it as a replacement, paying the 350 or so Thai Baht and getting the store assistant to cut out the tag inside so I could wear it straight away. The heat in Bangkok can be brutal at times, so it was comforting to know that my bonce was now ready for the outside again.

At just after 1 pm and earlier than I had expected to, I cut my losses and left the MBK to travel back to the hotel to prepare for my trip to the airport. My time here was nearly at an end and I felt I was just about ready to leave. 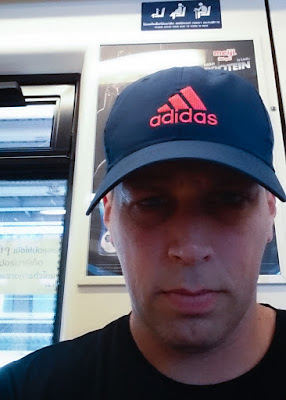 Posted by James Aitken at 13:48 No comments: