The travel bag that I brought lays empty 100 miles away from where I am currently located, propped against my old bed and still wrapped in the same plastic sheet that covered it when it was delivered. The urgency of wanting to embark on (what I hoped would have been) a more permanent adventure before I reached the age of 46 years has passed. Time has trundled on relentlessly and I've been left somewhat in it's wake and it may now be a little while before I get the chance to get going again, or regain the desire and energy to do so. I'll just have to see what happens.

The eye situation carries on. It was the beginning of August that the sight in my left eye was deemed ineffective enough to warrant the non-renewal of my UK driving licence. Nearly 5 months since and it's still debatable depending on who you ask, whether an operation to remove the still forming cataract is possible and/or beneficial. The fact that with glasses on I can read the letters on a chart at a certain level means that I have yet to reach the point where the operation is deemed necessary, but of course this doesn't take into account the demise of the peripheral vision which in my case is the aspect that has got progressively worse. The last consultant that examined the eye was amazed that I could see as well as I could through it, given how thick the cataract has become over time, but suggested that there could be a slim chance that the case could be made for the operation to be funded given my circumstances. The case would need to be made through the respective medical channels and the same consultant was also keen enough to point out that he's not known of such a case that has successfully had funding approved for as yet.

So whilst I wait to see how this saga unfolds, I am working in front of a screen all day, staring at texts for long periods and straining my eyes further. The impact has been that my visual acuity has diminished sharply over the past four months that I have been back in my role, which now perhaps understandably, is leading me to question just how much longer I can, or should, keep pushing on. Initially this was going to be a temporary role until I could get away and it was a situation that suited both parties, the workplace itself being busy but enjoyable most of the time and the people (generally) good fun and affable. There is no shortage of tea to be drunk and "so poor they are funny" jokes being made, but there have been days recently where I am feeling more Donald Pleasence than Steve McQueen. Moments have arisen where briefly, with or without my glasses, my vision hasn't been sharp enough to do my job effectively and have required me to break away from my screen for a while. These blurry moments whilst admittedly rare are an unfortunate development and this again is giving me some food for thought. Not  nice, mouthwateringly succulent food thoughts, but more a dry leathery chewy meat type affair that may eventually need to be spat out. Now all I need is Dickie Attenborough to stick his foot out and trip me up and my work time there will be complete.

I've endured a bit of a poor few months health wise, either from a recurring flu type virus or an ongoing bombardment of smaller (but no less effective) illnesses which have managed to beat the crap out of me. This kind of thing has not only hit me physically, but has also drained almost all enthusiasm for learning or pushing any ideas forward. The last couple of weeks however it does seem to have relinquished it's grip enough for me to make small steps forward. For now this involves me making a concerted effort to restoring my health back to where I feel it should be and this task has already begun. I am heavier than I have been for about 8 years or so, which hasn't been helped by a small spike in weight that has happened since putting myself back into training. In the coming weeks and months however I am determined to lose just over 2 stone and whilst this might seem hopeful, I believe it to be doable. It's just going to take a bit more determination and effort than it has done in the past

When this first part of the puzzle starts coming together, hopefully I can start thinking of new ways to move forward. If I can get a decision one way or another on the eye then perhaps that will free up some mental resource for me to be able to work towards something else. I have thought of a few projects that I have almost forced myself into, but none have enthused me in the way that I believe that I need to be enthused in order to make any new venture worthwhile. Perhaps I haven't yet hit on that one thing that is a big enough kick to get things to whirring properly again.

There is the possibility of course that this fabled "thing" doesn't exist anymore, lost in time against an ever grey skyline of dirty rain and dull buildings, uninspired graffiti and tags and the smell of dope endlessly hanging in the Bristol air. I hope beyond hope that this is not the case. Whilst I'm not overly worried yet about what I would do if I ever found the means or desire to leave for a different existence, I am more concerned about what should happen to me if I don't. 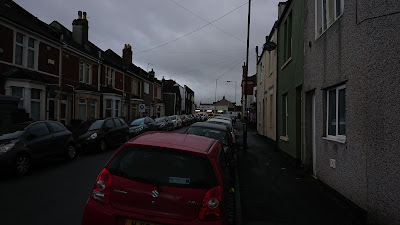 Perhaps I could become an Olympic Ski Jumper...