It's been a month. Not a funny month, an interesting, dull or an exciting month. just a month. The most accurate description I can give it is the one with which I started. It has all been rather non-descript. That in itself isn't necessarily a bad thing.

I have rented a room. This is more difficult than you might imagine at this point in my life as many of the rental spaces are for young professional adults, or students, and I no longer fall into either category. Despite my best google searches for variants of "awesome but reasonably priced rooms for middle aged grumpy diabetics", the market does not appear to be awash with such places. In light of this I loosened my search criteria a little. I am now an awesome grumpy diabetic in an expensive room.

I have committed myself to staying here for the next six months. Many people my age have a different set of commitments than I find myself with. Whilst some may have things such as mortgages, marriages and children to be wary of and/or responsible for (or even the odd poker night or football match to attend) I now find myself with something far more serious. I have a pricey gym membership with it's own card and everything. So far I have been a member for just over 10 days, attending 6 times, leaving my wallet behind once and my membership card behind another. I have found in the past that losing a wallet tends to be the easiest way to lose a few pounds, however this time everything was returned intact. I'm just going to have to go about losing it all the hard way.

6 Months I thought would give me the time I need to drop 2 stone/10 kg and get myself back to where I really should be. I have dropped 2lb in the first week so I know that with my regime it's going to be an achievable target. The problem at the moment, as always, is that it's getting the diabetic control and insulin levels to a point that I can really hammer myself productively in an exercise sense. I am, maybe rather surprisingly, by no means unfit. I can go in a do 2 or 3 hours cardio in an evening when my sugars allow it. It's just at the moment my base insulin level that runs in the background is resulting in the need to drink an excessive amount of energy drink to stop myself from crashing. I would like to be less dependent on these going forward, although technically not going forward as the majority of my work is being done on treadmills and stationary exercise bikes. Still, being full up on cherry or orange lucozade sport to the point where you want to be sick just to avoid  collapsing whilst exercising is something that I could really do without right now.

I'm also hoping that these hours will help me to formulate an idea, or even ideas for moving forward. I have been working back in-front of a screen now for just under 2 months, but it's amazing how quickly working on the monitor all day whilst squinting at code has reduced my visual acuity. There are days now where I feel that wearing glasses is beneficial, where over the previous months and years that I have been away from such work, my vision had returned to a point where glasses were not really that necessary. It's clear then from the fact that things are ultimately getting unclear, that my future should probably involve something away from what I am currently doing, or maybe at least for the amount of time that I am doing it. It's a shame really as I do quite enjoy it sometimes. It's nice to be able to lovingly take the piss out of people in a safe environment, where everyone knows that's all I'm doing.

In 6 months here the winter will be almost over and whilst I have no real doubts that it's going to be (on a personal level) a long hard one (whehey?), I hope to have in that time, gained an idea about where I can go from here. The U.K it seems has gone quite mad. Brexit has divided much of the population, people wear shorts in the cold along with bobble hats at the same time to keep warm and this morning I saw people lining up to buy cheese toasties in the local market that were priced at £5.00 a time.

It's not the madness that gets you...

it's the utter, utter madness.

now back to the overly expensive beer, which is unfortunately, worth every single penny at the moment. 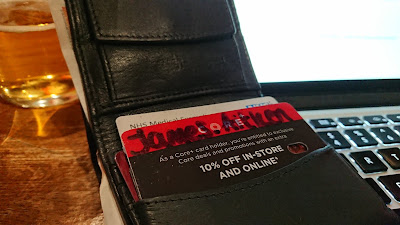 Posted by James Aitken at 21:59 No comments: