The distance between Chiang Mai in the North of Thailand and Yangon according to Google is 231 miles, so what potentially could have been just a short flight away. However, not blessed with wings of our own we were limited to taking the scheduled flight option to get between the 2 points, which meant initially flying down to Bangkok, changing planes and then flying back up on the other side of the Thai / Myanmar border, overall a distance in the region of 3 to 4 times what it would have been if we were able to fly direct. Leaving the hotel at just after 2pm, we eventually landed in Myanmar around 7 hours later with only 2 hours of that time spent in the air. The rest was spent sat around waiting, drinking tea, tea drinking and waiting around.

Reminiscent of an airport set that might have been featured in an episode of ITV's Duty Free in the late 1980's,Yangon airport was nothing if not functional. No motorised walkways meant no motorised walkways not working, escalators went up and down as escaltors should and with only the 1 luggage delivery belt in use out of a possible 3 it was easy enough to find our luggage when they duly came through. In only a short period of time we passed through immigration, collected our baggage and exited the customs channel without a hitch. Unfortunately, by the time we made the foyer none of the Burmese telecom booths remained open, so we just obtained some local money from the available cashpoints and currency exchange counter and jumped into a taxi to the hotel. A trip of about half an hour which cost 13,000 Kyats, or around 6.50 in UK poundage. SIM cards would have to wait.

A smooth journey ensued on which by night were seemingly modern roads, with plenty of well lit signs for restaurants and garages along the way into the town and lots of them either in English or with English translations alongside. Notably there were no motorbikes on the road whatsoever. At the MK Hotel in Downtown Yangon we went through the checking in formalities, dropped the bags at our room several floors up and headed out to look for food, giving up the search shortly after as I had tripped multiple times on the dark, uneven street.  We instead settled for a couple of bags full of snacks and prepacked food from the local convenience store and returned without further adventure, injury or mishap. Back at the hotel the room smelt a little damp and musty, nothing overpowering but like it hadn't been used for some time, and whilst Vicky had a cold and didn't really notice it, I was too tired to care too much and shortly drifted off to sleep, ready for an early start the next day to see what the City had to offer. At 1 am I was wide awake listening to music, it seems the subconscious me never wants to play strictly by the rules, or do things that would ultimately be of benefit. 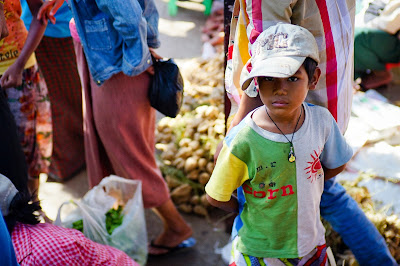 The plan was to stay in Yangon for a few days, however with Vicky struggling to get over her bug we decided not to rush things and spent those first few days taking it easy, walking the streets, visiting markets, empty malls, temples, pagodas, and squares, all the time surrounded by the noise and dust that comes with a city under construction. Building work is going on everywhere at a frantic rate, new flats, offices, shopping spaces, restaurants all ready to take advantage or this seemingly re-emerging city. However around, next to, under all this "Progress", there are still signs of people living in abject poverty, women and children asking for money to feed themselves and their families, not because they want to beg, but because they are desperate to survive. Women holding their offspring close by, themselves looking seriously gaunt and ill as they hope that they will be able to get a small amount of change in order to provide their children with something to eat is unfortunately the image of Yangon that will be the longest lasting in my mind above all the good.

Maybe it's that I've never over valued money as I've never had an abundance of it, or maybe I'm just a simpleton on the whole, but it seems wrong to me that while companies move into Yangon with big profits on their agenda, nothing is apparently happening to help those in the most need. I hope I'm wrong. It would be nice to see companies that are profiting from being in an area also contributingnto the greater good of the people in the area. I know this isn't just a Burmese problem, but for me it's the first time I have experienced anything quite like it, and for me then it's here that it's really struck home.

I don't want this to come across as just knocking Yangon, there was plenty there that was also really positive. The people are almost overwhelmingly friendly and welcoming, the coffee is awesome and an abundance of birds fly from picturesque old colonial buildings as people navigate the wide streets below, dodging traffic, pushing food stalls and laughing at any "close calls".  Monks, young and old, male and female, walk the street collecting money in large silver bowls, while gold adorns the stupas and temples that can be found along almost any direction you choose to navigate. There is a undeniable life, soul and energy that is hard not to be enamoured with here and the entire place feels like it's on the cusp of massive change, a venture into the yet unknown.

My only hope is that this change is a positive one for everyone who lives in Yangon, and the benefits can be passed on to those who perhaps are struggling the most in the city, rather than only those who find themselves perched at the very top of the tree. 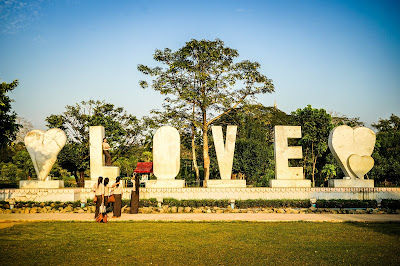